#19: Bike down the Leslie Spit

Getting to know the ins and outs my city has always been a resolution, but it wasn't until I was on sick leave that I became fully aware of everything I was missing out on.

One afternoon in particular, I made lunch plans with a friend who lives in the east end. Well, not just the east end, she lived far into the east end. For someone who doesn't leave downtown unless it's on a highway, this seemed like a major, and unexpected trek.

It was a nice surprise, however. Her house were quaint and welcoming, the lots were long and deep, and the neighbourhoods were intimate and friendly. I even got free street parking!

Since then, I've made a point of venturing to new spots in Toronto, and high on that list is the Leslie Spit (officially known as Tommy Thompson Park). This headland is unique spot because it's only accessible by bike, Rollerblade or foot, it's a totally man-made urban wilderness, but also because it provides Torontonians with a spectacular view of the city they love.

So, what to do on a sunny, clear Saturday afternoon? Drag my friend Sara out of bed, hop on our bikes, and make the 15km trip to the southernmost point of the Toronto harbour!

Not only was it an opportunity to get some serious exercise and get some fresh air, but it was a much needed escape from the concrete bounds of downtown living.

Breaking out of my daily routine and making the trip to the Leslie Spit renewed my love for this city. I hope I never stop discovering more of it! 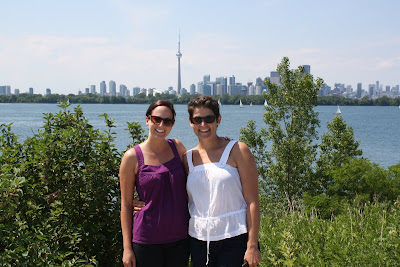