There's at least one advantage to facing a health crisis: all the stresses I faced in my daily life immediately become secondary. The questions most 20-somethings face like whether I should apply for that job, go back to school, save money to travel, invest in a house or condo, buy that $300 bag (haha) became irrelevant compared to my compromised health. I won't lie, it was nice not worry about the likely denial of my annual Masters applications.

Of course, the bonus was short-lived. Upon returning to work, the pre-cancer worries came crashing back with quadruple the urgency. Hearing about my colleagues' travel plans, promotions, new positions, plans to move in with a partner, etc., etc., left me feeling like I had fallen seriously behind.

I remember one morning, after a colleague arrived to work late due to subway delays, our office launched into everyone's account of transit systems across the world. One colleague wowed us with her description of Japan's system, which sounded exponentially better than Toronto's.

New York's subway system also came up. I was dismayed to admit that I had visited NYC, but never taken the subway! It immediately became my mission to take transit at every foreign city I visited, simply to learn exactly how poor Toronto's system indeed is.

Last weekend, while my friends and I spent the weekend in Manhattan - I rode the MTA for the very first time! I'll admit, I had built up the experience a little too much in my head, and the system seemed initially comparable to that of Toronto.

After a couple of rides, however, I realized how much more efficient the NYC system is. Not only could we pay our fare by debit or credit (!!) but transferring was simple, and each different line approaching the station was well marked. You can't get anywhere in Manhattan, Queens, the Bronx, or Brooklyn without there being a subway stop easily accessible.

Travelling to new cities is an obvious post-cancer resolution, but experiencing the city and bringing back that knowledge gained to your own city was my main purpose of this resolution.

The next time a conversation starts up in our office comparing public transit systems, instead of sitting there grumbling over my year of disadvantages, I look forward to jumping in with my own take on Toronto's shortcomings. 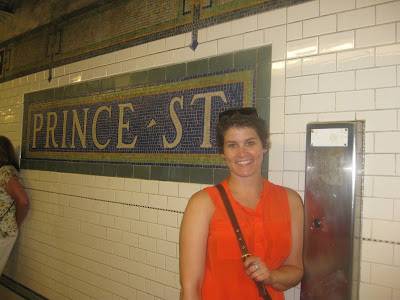